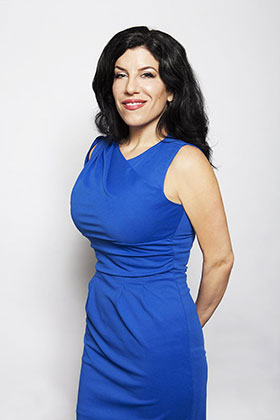 Marianna Gatto is the executive director and cofounder of the Italian American Museum of Los Angeles (IAMLA), a historian and author with two decades of experience in public history, non-profit leadership, museums, and education.

As director of the IAMLA Gatto oversees exhibitions, development, major gifts, programming, education, grants, and preservation initiatives, as well as advocacy and marketing. She authored and curated the IAMLA’s permanent exhibition, an award-winning exhibit that examines the 200-year history of Italian Americans in the region and nation.

In 2008 and 2009, Gatto spearheaded a campaign that resulted in an allocation of substantial public funds to renovate the Italian Hall, the historic building in which the IAMLA is located. Gatto became the executive director of the IAMLA in 2010.

As a historian Gatto’s research focuses on the Italian community of Los Angeles and the West. Her book, Los Angeles’s Little Italy, was released in 2009; her second work, Beyond Little Italy: Italian Americans in the City of Angels, is forthcoming. Gatto’s writings are featured in several publications, and she has appeared in various films, including the PBS series The Italian Americans, Finding the Mother Lode: Italian Americans in California, A Little Fellow, about the life of A.P. Giannini, and La Cucina Italiana in Los Angeles. She has also consulted for networks including the Discovery Channel and Netflix. Gatto has collaborated on local and national initiatives, among them California State Assembly Concurrent Resolution 68, and the historic designation of Tuna Canyon, a WWII-era detention center for Japanese Americans and Italian Americans. Gatto is a frequent lecturer on the Italian American experience. She has facilitated diversity and inclusion trainings for corporations and government entities, including the Department of Homeland Security and Equal Opportunity Employment Commission.

In 2008, Gatto created what has become the IAMLA’s signature annual event, Taste of Italy. She also researches and writes the histories of the museum’s elite cadre of donors known as the Founding Families. Among the temporary exhibitions she has created for IAMLA are The Sicilian Cart: History in Movement, Italianità: Artists of the Italian Diaspora Explore Identity, Woven Lives: Exploring Women’s Needlework from the Italian Diaspora, Leo Politi’s Los Angeles-Works of Love and Protest, and Fantasy World: Italian Americans in Animation.

Gatto began her career as an educator in one of the most economically disadvantaged neighborhoods of Los Angeles. She then worked as a museum administrator for the City of Los Angeles, overseeing matters pertaining to history, preservation, and education. She spearheaded acclaimed exhibitions including L.A. 225: Los Angeles Through the Eyes of Artists, Sacred Memories: Honoring the Dead Across Cultures, and Sunshine and Struggle: The Italian Presence in Los Angeles, 1827-1927. The California Education Standards-based curriculum guide she authored, My City, My History, is used in the region’s schools.

A lifelong resident of Los Angeles, Gatto attended the University of California, Los Angeles, and California State University Los Angeles, graduating magna cum laude with degrees in social science and history, before pursuing a teaching credential in secondary education and a master’s degree in history and education. Gatto has served as an advocate and consultant for non-profit organizations and the private sector in fields of policy, planning, and development. Gatto has been honored by the State of California and the City of Los Angeles. In 2021 the Italian republic awarded Gatto the Cavaliere dell’Ordine della Stella d’Italia (Knight of the Order of the Star of Italy).

Gatto is a dual citizen of the United States and Italy. She resides in Los Angeles and has an adult son.